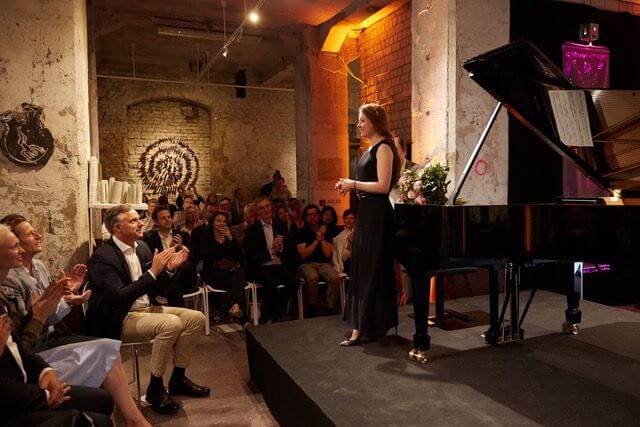 Berlin, 18 May 2018 – It was a great start: The piano prodigy Anastassiya Dranchuk gave a furious concert at the historic Kornversuchsspeicher in Berlin on Thursday evening. With works by Bach, Mozart and Liszt, the pianist enchanted her audience and captivated them.
The performance in the Kornversuchsspeicher was the warm-up concert at the beginning of her world tour.

The concert in the Europacity on Heidestraße

was attended by many celebrities from society and politics such as Countess Isa von Hardenberg and Berlin’s Senator of the Interior Andreas Geisel. Anastassiya Dranchuk deliberately entitled her very emotional performance “Back to the Game”.

Already at the age of 12 she followed the call of the Hochschule für Musik and came from Kazakhstan to Berlin. From here she travelled to concert halls all over the world. In the eagerness of her world career, she did not always comply with the formalities of the Berlin Foreigners Authority, which revoked her residence permit and passport in autumn 2016. In the meantime she has received both, now she is back in the big concert halls of the world.

The concert in the Kornversuchsspeicher is part of a series of prominent events with exhibitions, discussions and concerts at this location. The events take place regularly until the beginning of July and are continued in October after careful renovation measures.

The granary on the Berlin-Spandauer-Schifffahrtskanal is a unique industrial monument. It was built to secure and improve the supply of the rapidly growing Berlin population in the second half of the 19th century with new storage and transport methods for grain. When the warehouse was opened on October 1, 1898, it was a sign of a new beginning, renewal, and a spirit of innovation on the threshold to the 20th century. 120 years later, the Adler Real Estate, KauriCab and Taurecon, three companies from the real estate sector, have jointly taken up this creative idea of progress again and have made the widely visible monument in Europacity available as an art lab and space for innovations. The ideas developed in the historic brick building will continue to shape the spirit of the new quarters to the north of the main railway station beyond this temporary use. New spaces are to be designed and events continued in order to lay the foundation for a lively, innovative and widely radiating Europacity, which includes the Wasserstadt Mitte and the Quartier Heidestrasse.