Topping out ceremony for QH Core 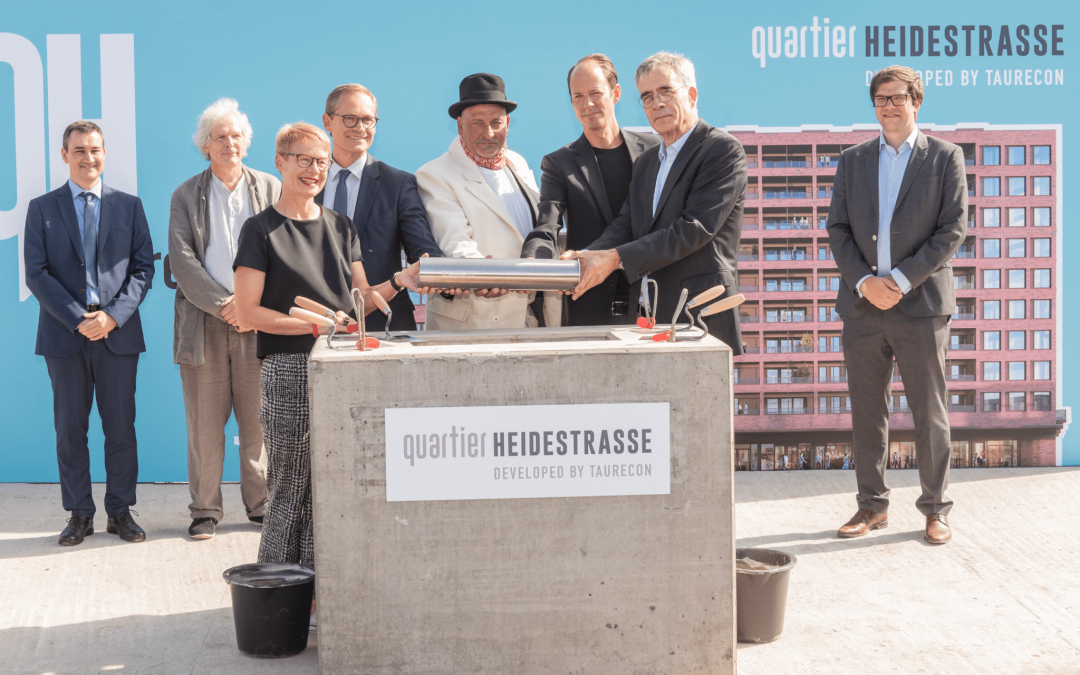 Berlin, 16 October 2019. The Quartier Heidestrasse is growing up: For QH Core, not far from the Berlin Central Station, the roofing ceremony was celebrated in the presence of Berlin State Building Director Regula Lüscher. The Quartier belongs to the Europacity and is among the largest quartier developments in the capital.

QH Core will form the future heart of the Quartier Heidestrasse and the northern Europacity. Here a central location for retail and gastronomy, 166 rental apartments and offices is being created. QH Core comprises a total of 28,700 square meters of rental space, of which 10,900 square meters of office space as well as 5,500 for commerce and gastronomy. There will be 240 parking spaces for cars in the two-level underground garage. QH Core is being built on the future Quartiersplatz where numerous routes intersect. The project is being implemented by Taurecon, the developer of highly modern and digital quartiers.

The new construction is distinguished by its very striking red brick façade. The design for the six and nine storey building, with the front bordering the Heidestrasse, originated in the offices of ROBERTNEUNTM Architects. They lend the ensemble its clearly structured façade and hence an impressive appearance. The variety of uses, mixture and great liveliness in QH Core is clear.

Regula Lüscher, State Building Director and State Secretary in the Berlin State Department for Urban Development and Housing, said on the occasion of the roofing ceremony: “The Heidestrasse city quartier gains more and more form and already next year Berlin residents will also live and work in QH Core. QH Core is a striking architectural symbol with a self-confident design language and interesting programming located at a strategic urban development site within the Europacity. Thus it creates the prerequisite for location-adjusted mixed use and qualities of presence in the entire urban quarter.“

Thomas Bergander, general manager of Taurecon Real Estate Consulting GmbH, stresses: “With the Quartier Heidestrasse we are erecting a very special city neighbourhood, a quartier of the future. Here we are making life and work for people more pleasant, charming and simpler through the use of intelligent technologies and committed networking of all the buildings. This digital service system includes topics like e-mobility and sharing models, extending to a “Bring and Take Station” and intelligent parking lot control system. QH Core is the first building stone. Here we are creating a lively location where people will feel at home, where they will be glad to work, live and even spend their free time – a model for the future of Berlin.”

The shell for QH Core was completed with less than one and a half years of construction work. Completion is planned for 2020. Taurecon has already concluded numerous leases for retail and office spaces. For example a Rewe supermarket with some 2,500 square meters of sales space will be built. The German association of private health insurers (Verband der Privaten Krankenversicherung e.V.) has also let office space. 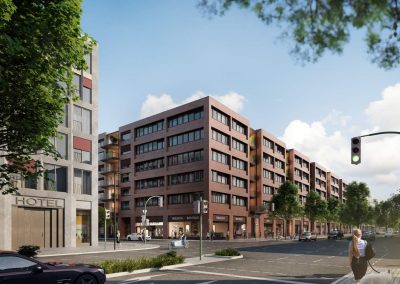 Quartier Heidestrasse is being erected on some 8.5 hectares. In several stages a total of 159,500 square meters of office and commercial space as well as some 920 apartments will be constructed. Along with QH Core, the project segments QH Spring and QH Track are already under construction.

The company was founded by Thomas Bergander to focus on real estate due diligence and project development for private and institutional clients. In Berlin the company is engaged in project development for Quartier Heidestrasse in the Europacity, responsible for coordinating the entire planning process from conception to completion. Services include among other things engagement and coordination of the teams involved, support during the construction permit, planning and competitions, as well as organisation of sales and marketing. Taurecon assumes the monitoring function for the Wasserstadt project in the Europacity Berlin on behalf of Adler Real Estate. Taurecon organises the entire acquisition process if requested by its clients.

Quartier Heidestraße GmbH, established in 2014, the company’s purpose is to develop the project Quartier Heidestraße into a lively city neighbourhood as part of the Europacity. In the sense of the “Berlin mixture”, residential and office buildings, commercial space, public roads and squares are to be created here. Altogether some 159,500 m2 of gross floor space for commercial and retailing as well as some 920 residential apartments are planned. Thomas Bergander is the general manager of the GmbH.
Webseite: quartier-heidestrasse.com