Picking up the Pace: Foundation Stone–laying Ceremony for Three Buildings in Quartier Heidestrasse

Berlin, 23 March 2021. Quartier Heidestrasse (QH) had three reasons to celebrate today, as foundation stones were laid for three of the several development projects: QH Colonnades, QH Straight and the southern part of QH Crown. The projects will add about 67,000 sqm to the existing GFA for apartments, offices, retail, food and dining on Heidestrasse by the end of 2022. Only a small circle of guests was invited to attend the ceremony due to the pandemic.

On the occasion, Regula Lüscher, Senate Building Director and State Secretary at the Senate Department for Urban Development and Housing said, ‘Three building sites, three architectural styles – ROBERTNEUN’s raw and industrial, Collignon’s elegant and classic, and GMP’s sculptural and high-value – speak for today’s diverse, colourful, metropolitan Berlin. Ever since the construction has been underway on the western building sites, the emerging Europacity began to feel like a city within the city. The high-quality architecture of the rising buildings, the range of housing accommodation and the diverse mix of uses is something we have never taken for granted. It is the result of collaboration between the State of Berlin, the project developer and everyone involved in the planning of the project.’

Thomas Bergander, Managing Director of the project developer Taurecon, spoke of the tremendous progress underway on QH, the new neighbourhood near Berlin’s main railway station: ‘In Quartier Heidestrasse, work continues as planned on laying the groundwork for a lively coexistence of living, working and leisure. All the stake-holders are happy and appreciative of the fact that we have continued our project despite the many challenges. Quartier Heidestrasse stands for vitality and energy, pleasant, functional neighbourhoods, and productive spaces. We are delighted to be laying the foundation stones today for our three individual development projects, QH Colonnades, QH Straight and QH Crown South. We would also like to take this opportunity to thank our partners and the relevant authorities for their support. A big thank you also goes to our team for continuing to drive this major project forward’. 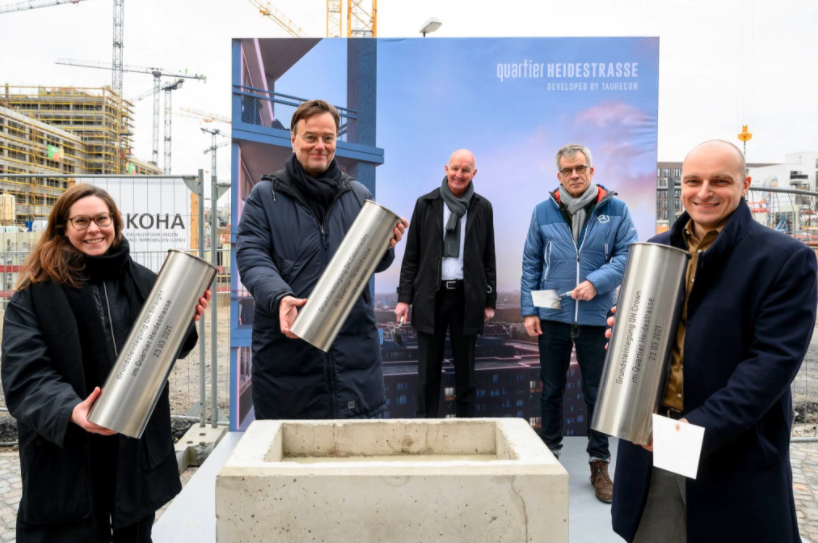 Mix it like Berlin!’ The Future Belongs to the City

With their wide diversity of uses, the QH Colonnades, QH Straight and QH Crown South projects embody the urban concept behind Quartier Heidestrasse. Across from the QH Core complex, which has already been completed and occupied, on the lively Quartiersplatz, will soon rise QH Colonnades, a building combining classic elegance with green retreats in the courtyard. The building will provide approximately 20,955 sqm GFA for 132 exclusive rental apartments, of which, 5,350 sqm GFA is for offices and 3,150 sqm GFA for retail, food, dining and studio space. Collignon Architektur has designed this timeless building.

To the north of this building is QH Straight, which is designed by the architect ROBERTNEUN. It will be a visually striking creation with rough, yet charming, features such as a seemingly unfinished concrete facade and vertically emphazised windows. QH Straight will cover approximately 22,130 sqm of interior GFA, with 5,500 sqm GFA earmarked for offices, 2,800 sqm GFA for retail on the ground floor and 131 rental apartments.
At the northern-most end of the development is the two-part building ensemble – QH Crown. The foundation stone of its southern part, QH Crown South, was also laid today. Its facade, with the brightness lent by its bronze and brass elements, will radiate metropolitan strength, durability and dignity. The complex will provide approximately 24,145 sqm of total GFA, which will include 5,720 sqm GFA for offices and 2,590 sqm GFA for retail, food and dining, as well as 130 exclusive rental apartments. gmp Architects have taken the lead in the design thus setting a further accent in Berlin’s new center within short distance of the main train station, which has also been designed by the architects.