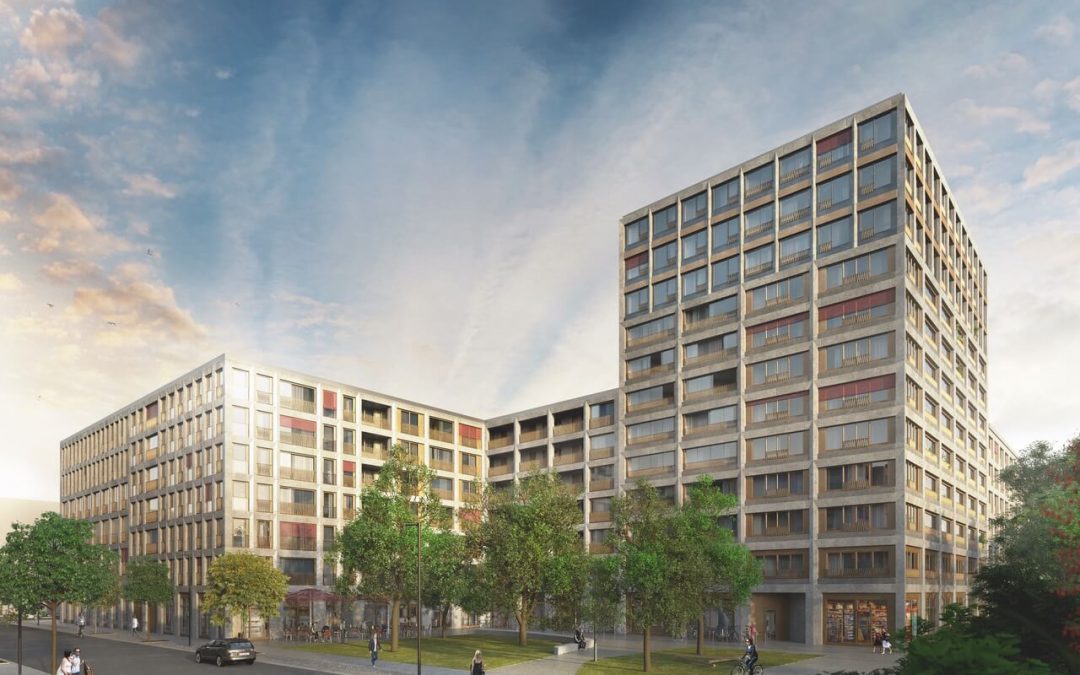 Berlin, 20 November 2019. The Quartier Heidestrasse continues to grow: For QH Spring, across the road from the Berlin Central Station, the cornerstone was laid today. The Quartier is a striking urban development element within the Europacity and is among the largest quartier developments in the capital.

QH Spring will form the future southern entrance to the Quartier Heidestrasse and connect the Quartier with the Europacity and its buildings some of which are older. Here a location is being created for residences, retail, and hotels as well as a child day-care centre. QH Spring comprises overall more than 19,770 square meters of rental space, including nearly 5,000 square meters for hotel use. The project is being implemented by Taurecon, the developer of highly modern and digital quartiers.

Thomas Bergander, general manager of Quartier Heidestraße GmbH, said: “QH Spring has a special significance for the Quartier Heidestrasse in several aspects. For one thing it receives the visitors coming from the central station and thus has an identity function characteristic for the Quartier. Secondly the building, with its variety of uses, embodies continuity with Berlin’s successful construction tradition, as it does with the concept of mixture seen as the future of the city. Mix it like Berlin, is also the leitmotif for the Quartier Heidestrasse. In the 21st century we will fulfil this ambition with determination by erecting a quartier that based on the state-of-the-art technology and above all conceived and developed as networked space. Thus we create the prerequisites for an economically and socially lively quarter oriented on the needs of the people who use it and which promotes a strong neighbourhood.“

The design calls for a hybrid block with striking personality in the urban landscape where a use mix comprising hotel, commercial units, market financed and subsidised housing as well as a child day-care centre are planned. The greater part of the total approximating 260 apartments are to be subject to rent regulation and are allocated throughout three building units. In the upper floors of the twelve-storey tower market financed apartments are available with a panorama of the Europacity and Berlin. The hotel offers 180 modern rooms to its guests, complemented by meeting rooms, lounge space, bar and breakfast restaurant.

Roland Kuhn, CKRS Architects, explains, “A striking distinction in comparison to similar major projects is the declared intention of the owners to retain the buildings in their own portfolio and operate them for the long term. Commitment to a high-value and durable architecture is clearly recognisable. We look forward to the continued cooperation and progress of construction.“

Completion of QH Spring is planned for the end of 2021.

Quartier Heidestrasse is being erected on some 8.5 hectares. In several stages a total of 159,500 square meters of office and commercial space as well as some 920 apartments will be constructed. Along with QH Spring, the project segments QH Core and QH Track are already under construction.

The company was founded by Thomas Bergander to focus on real estate due diligence and project development for private and institutional clients. In Berlin the company is engaged in project development for Quartier Heidestrasse in the Europacity, responsible for coordinating the entire planning process from conception to completion. Services include among other things engagement and coordination of the teams involved, support during the construction permit, planning and competitions, as well as organisation of sales and marketing. Taurecon assumes the controlling function for the Wasserstadt project in the Europacity Berlin on behalf of Adler Real Estate. Taurecon organises the entire acquisition process if requested by its clients.

Quartier Heidestraße GmbH established in 2014, the company’s purpose is to develop the project Quartier Heidestraße into a lively city neighbourhood as part of the Europacity. In the sense of the “Berlin mixture”, residential and office buildings, commercial space, public roads and squares are to be created here. Altogether some 159,500 m² of gross floor space for commercial and retailing as well as some 920 residential apartments are planned. Thomas Bergander is the general manager of the GmbH.
www.quartier-heidestrasse.com